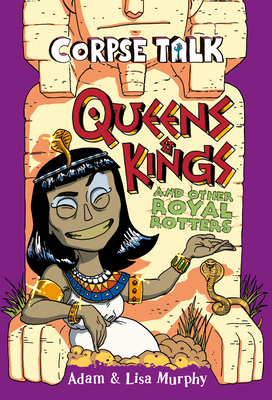 
Not On Our Shelves—Ships in 1-5 Days
Ever wonder what history’s monarchs would say if you could talk to them? Well wonder no more, as historical monarchs are interviewed from the grave in this hilarious children's graphic novel

Welcome to Corpse Talk, the chat show with a difference - all of the guests are dead! Your host, Adam Murphy interviews magnificent monarchs throughout history in this hilarious graphic novel and talk-show style book.

Inside the pages of this delightful graphic novel for kids, you’ll discover:

• Humorous text, in the format of an exchange between the interviewer and interviewee
• Full-page illustrations offer more detail on the broader cultural and historical context surrounding the monarch’s stories - from the workings of Ramesses II’s empire to the gruesome timeline of Henry VIII’s (mostly) unfortunate brides
• A diverse selection of rancorous rulers from around the world, from the Sultan Saladin and Chinese Emperor Qin Shi Huang Di to Pharaoh Cleopatra and Empress Matilda

Have you heard of Montezuma, the last ruler of the Aztecs? Or wondered why Queen Victoria was not amused? Find out in this exciting graphic novel! Delve into the lives of famous rulers like Cleopatra, Ramesses II, Henry VIII, and Mary Antoinette who all made ructions in their ruling days. Writer Adam Murphy explores the why, the what,  and what were you thinking of these monarchs’ most notorious decisions and behaviors. Just for fun, Adam peppers in a few silly and funny questions to amuse young readers in this hilarious history book for kids.

Bold and expressive illustrations by Adam and Lisa Murphy bring historical events to life, literally! The humorous text in this kid’s comic book makes learning history fun and entertaining. Whether you’re a fan of these superb sovereigns or just love a good story, this history book will not fail to inspire you and make you laugh.

DK's Corpse Talk series is a hilarious series of graphic novels for kids that delves into the history of dead famous people in the format of questions and answers. Other books in this series include Corpse Talk: Groundbreaking Women and Corpse Talk: Groundbreaking Scientists.
Adam Murphy has been writing and drawing comics for The Phoenix, a weekly kids' magazine in the UK, since 2012. He co-created the comics series CorpseTalk with his wife, Lisa Murphy. Their other comics series, Lost Tales, has been nominated for a Blue Peter Book Award, and was the winner of the British Comics Awards Young People's category in 2016. Adam and Lisa's first book, Corpse Talk: Season 1, was published by David Fickling Books in 2014.