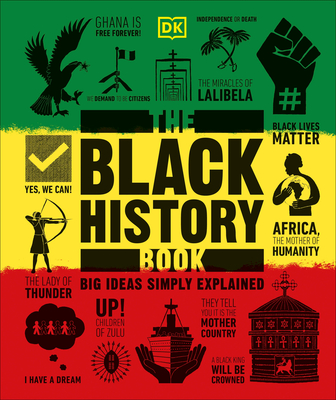 By DK, David Olusoga (Foreword by)


In Stock—Click for Locations
Discover the rich and complex history of the peoples of Africa, and the struggles and triumphs of Black cultures and communities around the world.

With profiles of key people, movements, and events, The Black History Book brings together accounts of the most significant ideas and milestones in Black history and culture. This vital and thought-provoking book presents a bold and accessible overview of the history of the African continent and its peoples – from the earliest human migrations to modern Black communities and the African diaspora.

Powerful images and innovative infographics bring to life the stories of the early kingdoms of Ancient Egypt, Nubia, and Carthage; the powerful empires of the Medieval and Early Modern eras; and the struggle against European colonizers. Black history and culture beyond the African continent is also explored in detail – including the Atlantic Slave Trade; the quilombos (slave resistance camps) of Brazil; the Harlem Renaissance and Jazz Age; the “Windrush” migration; Civil Rights and Black feminist movements; and Black Lives Matter.

Using the “Big Ideas” series’ trademark combination of authoritative, accessible text and bold graphics, The Black History Book examines the achievements and struggles of Black communities across the world up to the modern day, as well as the influence of Black cultures on art, literature, and music the world over.
Foreword writer David Olusoga is a British-Nigerian historian, broadcaster, and filmmaker. His most recent TV series include Empire (BBC 2), Black and British: A Forgotten History (BBC 2), and the BAFTA Award-winning Britain’s Forgotten Slave Owners (BBC 2). David is also the author of Black and British: A Forgotten History, which was awarded both the Longman–History Today Trustees’ Award and the PEN Hessell-Tiltman Prize. He writes for The Guardian and is a columnist for The Observer and BBC History Magazine.

"Readers of all levels will enjoy the aesthetics, content, and presentation of this encyclopedia that so aptly captures the rich history of Black culture.” –Library Journal, STARRED Review