Revolution in Rojava: Democratic Autonomy and Women's Liberation in the Syrian Kurdistan (Paperback) 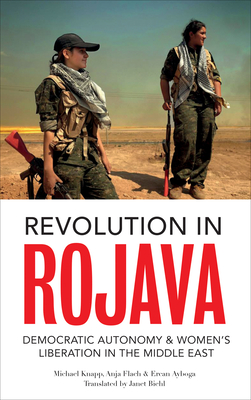 Revolution in Rojava: Democratic Autonomy and Women's Liberation in the Syrian Kurdistan (Paperback)


Not On Our Shelves—Ships in 1-5 Days
(This book cannot be returned.)
“Their first-hand experiences and active participation in the anti-capitalist society being built in the region make this the first detailed account of the popular revolution….The definitive book so far on Rojava."― Morning Star

Revolution in Rojava tells the story of Rojava's groundbreaking experiment in what they call democratic confederalism, a communally organized democracy that is fiercely anti-capitalist and committed to female equality, while rejecting reactionary nationalist ideologies.

Rooted in the ideas of imprisoned Kurdish leader Abdullah Ocalan, the system is built on effective gender quotas, bottom-up democratic structures, far-sighted ecological policies, and a powerful militancy that has allowed the region to keep ISIS at bay.

Given the widespread violence and suffering in Syria, it's not unreasonable that outsiders look at the situation as unrelentingly awful. And while the reality of the devastation is undeniable, there is reason for hope in at least one small pocket of the nation: the cantons of Rojava in Syrian Kurdistan, where in the wake of war people are quietly building one of the most progressive societies in the world today. Chapters here include:

This first full-length study of democratic developments in Rojava tells an extraordinary and powerfully hopeful story of a little-known battle for true freedom in dark times. With excellent first-hand background information about this important, but little understood struggle, Revolution in Rojava will educate and inspire the reader to learn more about Rojava, Syria, and the fight for change in one of the world’s most dangerous regions.

Michael Knapp is a historian of radical democracy, Ercan Ayboga is an environmental engineer and activist, and Anja Flach is an enthologist and member of the Rojbîn women's council in Hamburg. Janet Biehl is a writer, editor, and translator. She was Murray Bookchin's copyeditor for the last two decades of Bookchin's professional life, and has published several books, including Ecology or Catastrophe: The Life of Murray Bookchin.

"The authors have not just visited Rojava but have worked to build the revolution and have fought to defend it. Their first-hand experiences and active participation in the anti-capitalist society being built in the region make this the first detailed account of the popular revolution. Based on a series of interviews and discussions, along with observation and participation in the complex series of democratic structures — communes, people’s councils, commissions and co-ordinating bodies — the level of detail marks this out as the definitive book so far on Rojava."

"Despite the challenges Rojava faces, it does provide an inspiring alternative. The book is an essential and extremely inspiring look at an alternative conception of revolution that might just work. In the year we celebrate 100 years since the Russian Revolution, new conditions mean that we need to adapt. Revolution in Rojava provides much food for thought in rethinking revolution, the state and a politics that puts deep democracy, ecology and feminism at the centre."

"Essential reading for anyone interested in what's coming next in the Middle East, as it precisely details Rojava's transformation, the new political horizon it presents, and its prospects for the future. Revolution in Rojava is, above all, a testament to humanity’s political potential."
— Axis of Logic

''Written by long-time activists of the Kurdish freedom movement, this book is the first authentic insight into the complex dimensions of Rojava’s radical revolution. From autonomous women's communes to ecological cooperatives to multiethnic peoples’ self-defense, the authors let us enter a world of freedom cries - a deeply human grassroots revolution with the potential to change the course of Middle Eastern civilization. Recommended for all believers in humanity.''

— Dilar Dirik, journalist and activist of the Kurdish Women's Movement

''The Kurdish revolution of Democratic Autonomy is of enormous importance for the future of the world. It points a possible way forward out of the tragedy of the Middle East, and more than that: a possible way forward out of the catastrophe that is capitalism. This book is of great help...A careful and detailed account that is filled with personal narrative, it is both easily accessible and very informative.''