Basher History: National Parks: Where the Wild Things Are! (Hardcover) 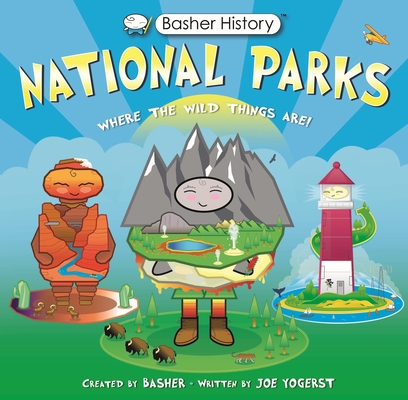 Basher History: National Parks: Where the Wild Things Are! (Hardcover)

• Which national park was America’s first, and what hot-water features will you find there?
• In which national park would you find rock formations called the Witch’s Finger and the Devil’s Armchair?
• And what exactly is a saguaro, almost 2 million of which can be found in its namesake national park?

From the high peaks of the Rockies to the lows of Death Valley, from the Statue of Liberty in the East to the redwood forest of the West, and from the panoramic views of the Grand Canyon to getting up close and personal to wildlife in Yellowstone, Basher invites you to take a journey through some of the United States’ most spectacular national parks, recreation areas, and preserves—and take in a few national monuments while you’re at it! Paddle a canoe through the Everglades, zip down gypsum dunes at White Sands, and count the brown bears at Katmai. There’s no end to the natural wonders you’ll see.

Artist and designer Simon Basher has fun playing in the world of contemporary character design. Inspired by a love of simple line work and a rich color palette, his characters fill the gap between edgy manga and the cuteness of Hello Kitty. He lives in England.