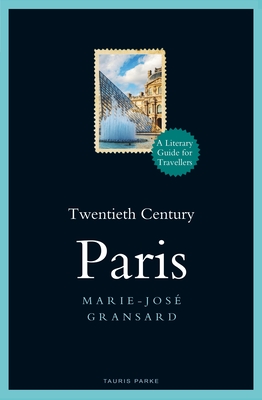 Paris is the crowning jewel of France, and this literary guide for travellers explores its 20th century history, from 1900-1950.

The myth of Paris as a romantic city survives - Paris, the city of exiles, artists, writers, princes and thieves. The early-twentieth century idea was that the French capital was a place for indulgence 'la capitale de l'amour'. By the beginning of the twentieth century the many artists, writers and thinkers visiting Paris had a different idea of fun; they went there to enjoy the beauty of the city which had become Europe's cultural center, as well as to experience the general sense of excitement and freedom it offered.

Twentieth Century Paris: A Literary Guide for Travellers takes the literary-minded traveller (either in person or in an armchair) on a vivid and illuminating journey, retracing the footsteps of writers who have lived and worked in, or been inspired by, the history and cityscape of Paris from James Joyce, George Orwell, Ezra Pound, Katherine Mansfield and Jean Rhys to Virginia Woolf, Edith Wharton and Ernest Hemingway and many others. It also includes writers and thinkers such as Amedeo Modigliani and Leon Trotsky.

Marie-José Gransard illuminates one of the most influential centuries in the city's flamboyant literary and cultural history.

Born in Northern France, Marie-José Gransard studied English at the Sorbonne in Paris and her career has been in language and culture. She has worked with Hilary Spurling on her biography of Matisse and with Anthony Holden for his biography of Lorenzo da Ponte. She divides her time between Venice and London where she is presently researching the literary legacy of visitors to the city.

"Twentieth Century Paris is stuffed full of fascinating information about the denizens of Paris during the first half of the century [...] also contains a number of illustrations and maps, so it really is the perfect guidebook." - Shiny New Books

"a roll call of creativity, based on wide research, with a wealth of anecdote." - The Spectator