Health, Hedonism and Hypochondria: The Hidden History of Spas (Hardcover) 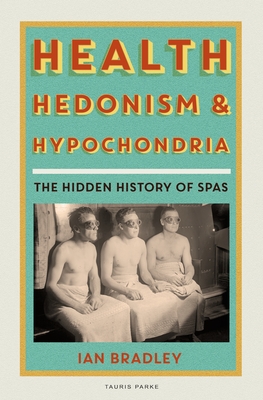 Health, Hedonism and Hypochondria: The Hidden History of Spas (Hardcover)

Health, Hedonism and Hypochondria looks below the surface and probes the more hidden aspects of the history of spas and their secret sides.

A spa nowadays can be anything from a hot tub in the back garden to an exotic beach resort offering mindfulness and yoga.

New spas are opening around the world at a rate of 8,000 a year and there are now over 150,000 'spa locations' and contributing $120 billion annually to the $4.2 trillion global wellness economy. This book is about the historic, traditional spas of Europe. They include such well known resorts as the original Spa in Belgium; Bath, Buxton and Harrogate in Britain; Baden-Baden, Bad Ems and Wiesbaden in Germany; Vichy and Aix-les-Bains in France and many more.

Health, Hedonism and Hypochondria looks below the surface and probes the more hidden aspects of the history of spas and their secret sides. Not only were they always sanctuaries of relaxation, but also places to treat melancholia and hypochondria, entertain mistresses and 'cure' sterility.

Ian Bradley is Emeritus Professor of Cultural and Spiritual History at the University of St Andrews and a prolific author and broadcaster.

"Plenty of shenanigans are recorded by the vigilant Ian Bradley... His new illustrated book is a labour of love - partly a history, partly a record of a lifelong scholarly hobby... While this book will be received as a scholarly contribution to the
literature, it is also great fun: how many other titles can you think of containing five initial aitches? Bradley is a lively and informative guide... One emerges from this book refreshed, as from a multi-angled shower of warm water." - Michael Wheeler, Church Times

"Here is a book to rekindle your belief in all that is inventive, beautiful, eccentric and fascinating about the world – to flush a bit of joy back into your veins. And god, it’s funny... Bradley has a gift for wrestling the most joyous morsels from his sources... Woven into this glorious, exhilarating history are hundreds of examples of the literature inspired by spas." - Lucy Davies, The Sunday Telegraph