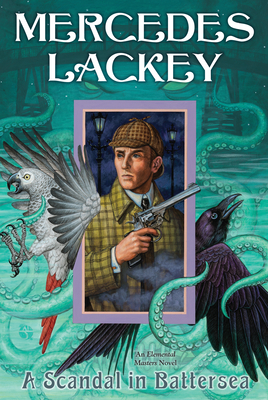 This is book number 12 in the Elemental Masters series.

Christmas is a very special time of year.  It is special for Psychic Nan Killian and Medium Sarah Lyon-White and their ward Suki, who are determined to celebrate it properly.  It is special for their friends, Doctor John Watson, and his wife Mary, both Elemental Masters, who have found great delight in the season seeing it through young Suki’s eyes.

It is also special to others...for very different reasons.

For Christmas Eve is also hallowed to dark forces, powers older than mankind, powers that come awake on this long, cold night.  Powers best left alone.  Powers that could shake the foundations of London and beyond.

It begins slowly.  Women disappearing in the dark of night, women only missed by those of their own kind.  The whispers only begin when they start to reappear—because when they do, they are no longer sane.  And when Nan and Sarah and the Watsons are called on to examine these victims, they discover that it was no ordinary horror of the streets that drove them mad.

But then, the shadows reach for other victims—girls of good, even exalted families, who vanish from concerts, lectures, and evening balls.  And it will take the combined forces of Magic, Psychic Powers, and the world's greatest detective to stop the darkness before it can conquer all.

Mercedes Lackey is a full-time writer and has published numerous novels and works of short fiction, including the best-selling Heralds of Valdemar series. She is also a professional lyricist and a licensed wild bird rehabilitator. She lives in Oklahoma with her husband, artist Larry Dixon, and their flock of parrots. She can be found at mercedeslackey.com or on Twitter at @mercedeslackey.
Praise for the Elemental Masters series: