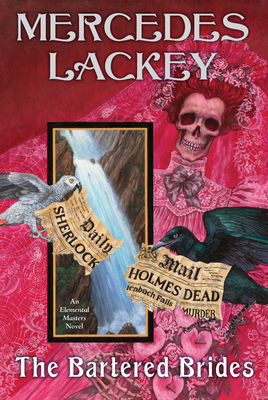 This is book number 13 in the Elemental Masters series.

The threat of Moriarty is gone—but so is Sherlock Holmes.

Even as they mourn the loss of their colleague, psychic Nan Killian, medium Sarah Lyon-White, and Elemental Masters John and Mary Watson must be vigilant, for members of Moriarty’s network are still at large. And their troubles are far from over: in a matter of weeks, two headless bodies of young brides wash up in major waterways. A couple who fears for their own recently-wedded daughter hires the group to investigate, but with each new body, the mystery only deepens.

The more bodies emerge, the more the gang suspects that there is dangerous magic at work, and that Moriarty’s associates are somehow involved. But as they race against the clock to uncover the killer, it will take all their talents, Magic, and Psychic Powers—and perhaps some help from a dearly departed friend—to bring the murderer to justice.
Mercedes Lackey is a full-time writer and has published numerous novels and works of short fiction, including the best-selling Heralds Of Valdemar series. She is also a professional lyricist and a licensed wild bird rehabilitator. She lives in Oklahoma with her husband, artist Larry Dixon, and their flock of parrots. She can be found at mercedeslackey.com.
Praise for the Elemental Masters series: