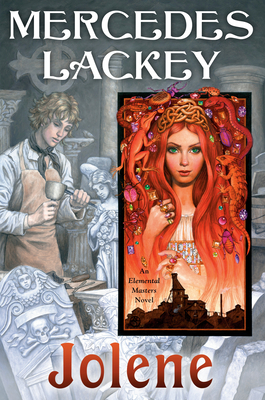 This is book number 15 in the Elemental Masters series.

The beloved Elemental Masters series moves to America for the first time in a rich retelling of The Queen of the Copper Mountain, set against the backdrop of Tennessee coal country.

Anna May Jones is the daughter of a coal miner, but a sickly constitution has kept her confined to the house for most of her life. Hoping to improve her daughter’s health—and lessen the burden on their family—Anna's mother sends her to live with her Aunt Jinny, a witchy-woman and an Elemental Master, in a holler outside of Ducktown.

As she settles into her new life, Anna learns new skills at Aunt Jinny’s side and discovers that she, too, has a gift for Elemental magic that Jinny calls “the Glory”. She also receives lessons from a mysterious and bewitching woman named Jolene, who assures her that, with time, Anna could become even more powerful than her aunt.

But with Anna’s increasing power comes increasing notice. Billie McDaran, the foreman of the Ducktown mine, begins to take an interest in Anna and her abilities—even though Anna has already fallen in love with a young man with a talent for stonecarving.

If she wants to preserve the life she has come to love, Anna must use her newfound powers to oppose the foreman and protect those around her.
Mercedes Lackey is a full-time writer and has published numerous novels and works of short fiction, including the best-selling Heralds of Valdemar series. She is also a professional lyricist and a licensed wild bird rehabilitator.
Praise for the Elemental Masters series