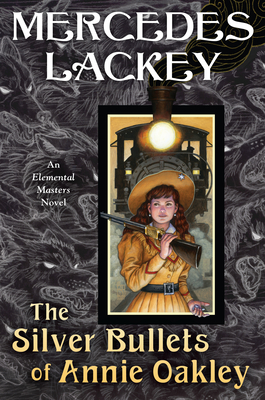 This is book number 16 in the Elemental Masters series.

Annie Oakley has always suspected there is something "uncanny" about herself, but has never been able to put a name to it. But when Buffalo Bill's Wild West Show goes on tour through Germany, Bill temporarily hires a new sharpshooter to be part of his "World Wide Congress of Rough Riders": a woman named Frida, who also happens to be an Elemental Master of Air. Alongside this new performer, Annie discovers that she and her husband, Frank, are not simply master marksman, but also magicians of rare ability.

As they travel and perform, Annie must use her newfound knowledge and rare skill to combat creatures of the night scattered across the countryside, who threaten both the performers and the locals. Annie's got her gun, and it's filled with silver bullets.
Mercedes Lackey is a full-time writer and has published numerous novels and works of short fiction, including the best-selling Heralds of Valdemar series. She is also a professional lyricist and a licensed wild bird rehabilitator.
Praise for the Elemental Masters series