Story of the Titanic (Hardcover) 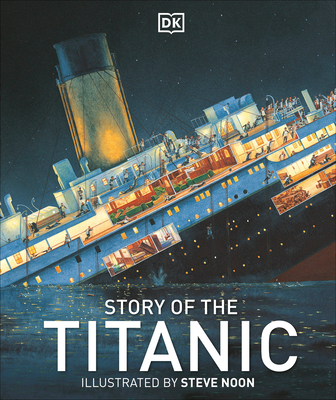 Story of the Titanic (Hardcover)


Not On Our Shelves—Ships in 1-5 Days
The true story of the world’s most famous ship is retold in this beautiful book with stunning visuals and a gripping narrative.

One fateful night in 1912 the so-called Ship of Dreams turned into a nightmare in the Atlantic Ocean after hitting an iceberg and sinking on its maiden voyage.

The tragedy of the Titanic is shown in dramatic original illustrations by award-winning artist Steve Noon. This luxurious liner still has the power to capture public imagination more than any other vessel in history and more than a century later. From being built and setting sail to sinking fast and saving lives, the Titanic is explored and explained in fascinating detail with intricate cutaway scenes and cross-sections.

Meet the captain, crew, and passengers from all walks of life who lost their lives or survived the sinking. Discover exactly what happened on the disastrous voyage, the reasons why Titanic sank, and what lessons were learned for the future. Watch the drama unfold as ordinary people became unsung heroes and the supposedly unsinkable ship became an underwater wreck.

Whether you’re a history buff or simply seeking help for a school project, this is the ultimate tribute to Titanic.

Steve Noon is an artist from Kent, England. Educated at Art College in Cornwall, he is the illustrator of A City Through Time, A Port Through Time, and A Street Through Time, as well as The Story of the Nile and The Story of the Titanic. He has received numerous awards for his illustrations, including the Shankei Children’s Literature Prize in 2001 and the Longman History Today History Book of the Year in 2000.Eric Kentley is an author, an assistant director of London's Design Museum, and a former ethnographer and the head of ship technology at the National Maritime Museum. Kentley is known for his work on The Pop-Up Book of Ships, Eyewitness: Boat, and Discover the Titanic (a DK Action Book).DK Publishing was founded in London in 1974 and is now the world's leading illustrated reference publisher and part of Penguin Random House, formed on July 1, 2013. DK publishes highly visual, photographic nonfiction for adults and children, and produces content for consumers in more than 87 countries and 62 languages, with offices in Delhi, London, Melbourne, Munich, New York, and Toronto. DK's aim is to inform, enrich, and entertain readers of all ages, and everything DK publishes, whether print or digital, embodies the unique DK design approach. DK brings unrivaled clarity to a wide range of topics with a unique combination of words and pictures, put together to spectacular effect. It has a reputation for innovation in design for both print and digital products. DK's adult range spans travel—including the award-winning DK Eyewitness Travel Guides—history, science, nature, sport, gardening, cookery, and parenting. DK's extensive children's list showcases a fantastic store of information for children, toddlers, and babies. DK covers everything from animals and the human body, to homework help and craft activities, together with an impressive list of licensing titles, including the bestselling LEGObooks. DK acts as the parent company for Alpha Books, publisher of the Idiot's Guides series and Prima Games, video gaming publishers, as well as the award-winning travel publisher Rough Guides.
"(A) visual treasure trove of illustrations rich in details, cutaway views, and archival photos." – School Library Journal