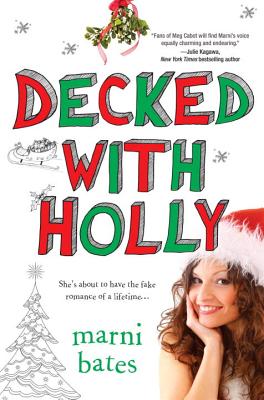 
Not On Our Shelves—Ships in 1-5 Days
(This book cannot be returned.)
Holly Dayton is about to go way out of her comfort zone. . .

Spending Christmas vacation on a cruise with her two cousins from hell isn't Holly's idea of a good time. And when in a moment of seasick-fueled desperation she lurches into an open suite--she's greeted with an eyeful of pepper spray. The culprit? A gorgeous guy calling himself Nick. But when Holly goes to make her exit, she gets the shock of her life: a corridor crammed with screaming teenage fans. Because Nick just happens to be Dominic Wyatt, drummer for ReadySet--one of the hottest bands in America.

Suddenly rumors are swirling, and Holly's face is captured on countless phones and plastered all over the Internet. But the band can't risk a scandal destroying their family-friendly image, so Dominic convinces Holly to be his fake girlfriend--just for two weeks. How bad could it be to be fauxmantically involved with one of the cutest rockstars on the planet? Holly's about to find out. . .

"Fans of Meg Cabot will find Marni's voice equally charming and endearing."--Julie Kagawa, New York Times bestselling author
Marni Bates still can’t believe she falls in love with fictional characters for a living. Her career began during her freshman year at Lewis & Clark College, when she wrote her autobiography, Marni, for HCI’s Louder Than Words series. By the time she graduated, she was on the New York Public Library’s Stuff for the Teen Age 2010 List and had made her fiction debut with her young adult novel, Awkward.

Marni is still adjusting to life in sunny Los Angeles, California. When not writing in front of her air conditioning unit, she can be found rollerblading, bargaining at garage sales, reading romance novels, and watching copious amounts of TV—strictly for artistic inspiration, of course. She loves hearing from readers and hopes that you will visit her at marnibates.com.