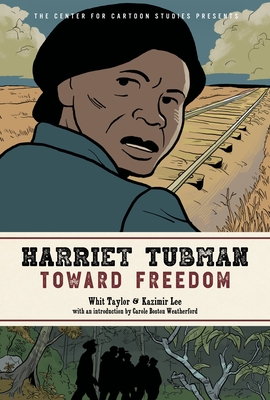 
On Our Shelves Now at:
This illuminating graphic novel biography about Harriet Tubman sheds new light on one of American history's bravest heroes.

​Harriet Tubman did something exceptionally courageous: She escaped slavery. Then she did something impossible: She went back. She underwent some thirteen missions to rescue around seventy enslaved people, using and expanding a network of abolitionists that became known as the Underground Railroad. She spent her life as an activist, speaking out for Black people and women's suffrage.

This modern account of her trip to save her brothers is detailed and authentic. Illustrated with care for the historical record, it offers insight into the life and mind of Tubman, displaying her as a woman with an unshakable desire to break the chains of an unjust society. It is a perfect anti-racist narrative for our times and deepens an understanding of just what freedom means to those who must fight for it.

Whit Taylor is an Ignatz Award-winning cartoonist, editor, and writer from New Jersey. She has authored many comics, including the graphic novel Ghost Stories, and is a regular contributor to the Nib.

Kazimir Lee is an animator, cartoonist, and illustrator, who has lived for almost equal amounts of time in Malaysia, the UK, and the US, now residing in Brooklyn, New York.

The Center for Cartoon Studies (CCS), America's premier cartooning school, was founded in 2005 and is located in downtown White River Junction, Vermont. Visit www.cartoonstudies.org.
"In addition to some of the more familiar aspects of Tubman’s story, this volume shines a light on both the dramatic aspects of freeing enslaved people and the emotional healing required of those who were successful in their quest for freedom."—Kirkus

"This solid biography is a natural choice for classrooms, but it should find a ready audience among more casual readers, too."—Booklist