The Book of Fun: An Illustrated History of Having a Good Time (Hardcover) 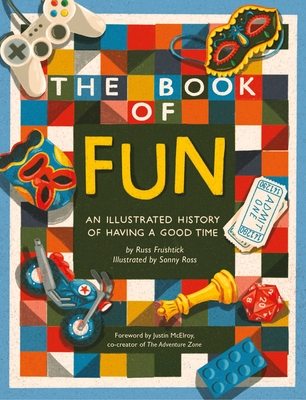 The Book of Fun: An Illustrated History of Having a Good Time (Hardcover)


On Our Shelves Now at:
Dive into this vibrantly illustrated history of everything humans have invented to entertain ourselves, from Chess and Nintendo to Drag Queen Story Hour and Burning Man.

In The Book of Fun, Polygon co-founder Russ Frushtick divulges the hidden backstories and fascinating facts about your favorite video games, theme parks, festivals, sports, and more. With 80+ digestible, entertaining entries, it's not just fodder for your next dinner party -- you might also discover your next great pastime, be it jousting, stunt acting, cheese rolling, or Swedish Bunny Hopping.

For fans of pop-history, pop-science, and the many things mankind has invented to waste time, The Book of Fun explores:

Russ Frushtick is the co-founder of Vox Media’s games vertical Polygon. He has covered video games and technology for over a decade, writing for The New York Times, Edge Magazine and The Verge.

Sonny Ross is a freelance Illustrator based in the UK whose clients include The New York Times, The Washington Post, The Guardian, Google, Polygon, and many others.