Nothing to Tell: Extraordinary Stories of Montana Ranch Women (Paperback) 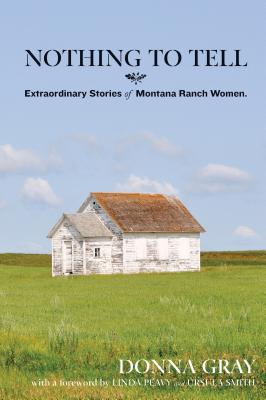 Nothing to Tell: Extraordinary Stories of Montana Ranch Women (Paperback)


Not On Our Shelves—Ships in 1-5 Days
Sitting at the kitchen tables of twelve women in their eighties who were born in or immigrated to Montana in the late nineteenth or early twentieth century, between 1982 and 1988 oral historian Donna Gray conducted interviews that reveal a rich heritage. In retelling their life stories, Gray steps aside and allows theses women with supposedly "nothing to tell" to speak for themselves. Pride, nostalgia, and triumph fill a dozen hearts as they realize how remarkable their lives have been and wonder how they did it all. Some of these women grew up in Montana in one-bedroom houses; others traveled in covered wagons before finding a home and falling in love with Montana. These raw accounts bring to life the childhood memories and adulthood experiences of ranch wives who were not afraid to milk a cow or bake in a wooden stove. From raising poultry to raising a family, these women knew the meaning of hard work. Several faced the hardships of family illness, poverty, and early widowhood. Through it all, they were known for their good sense of humor and strong sense of self.
Donna Gray moved to a ranch in Montana's Paradise Valley in the 1970s, where she became interested in the histories of neighboring ranch wives and began her search for the stories of Montana's rural women. Linda Peavy and Ursula Smith have co-authored ten books, including Pioneer Women and Women in Waiting in the Westward Movement.