My Havana: Memories of a Cuban Boyhood (Hardcover) 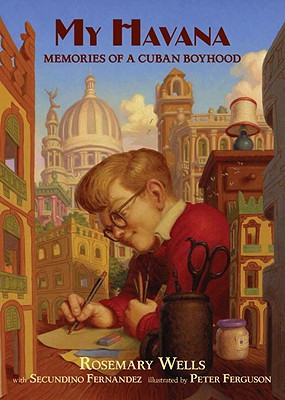 My Havana: Memories of a Cuban Boyhood (Hardcover)


Special Order—Subject to Availability
A young Cuban immigrant eases his homesickness by re-creating the city of Havana in a poignant tale that will resonate with readers today.

"You’re always drawing in that notebook of yours," Dino’s friend teases. To the small boy, 1950s Havana is alive with color, music, and glamour, and he itches to capture it on paper. When Fidel Castro and the Communist Party take over the Cuban government, Dino’s family must move to New York, where the lonely boy pours his heart into making a model of Havana’s archways and balconies, buildings and streets. Rosemary Wells composes a tender ode to an immigrant boy who grew up to be a U.S. architect, while Peter Ferguson’s atmospheric paintings evoke two vibrant cities as they were half a century ago.
Back matter includes an author’s note.
Rosemary Wells has written more than sixty books for children and has received numerous awards. She is the creator of the beloved Max and Ruby Stories and the illustrator of My Very First Mother Goose, edited by Iona Opie. She lives in upstate New York.

Secundino Fernandez moved from Havana, Cuba, to the United States with his family in 1959. He lives in New York, and works as an architect.

Peter Ferguson is a comic and editorial artist who has illustrated three books and written two novels for children. He lives in Montreal, Canada.
Short novel that brims with feeling. . . .Ferguson's illustrations are infused with a burnished ochre light, well suited to Dino's warm memories.
—Publishers Weekly (starred review)