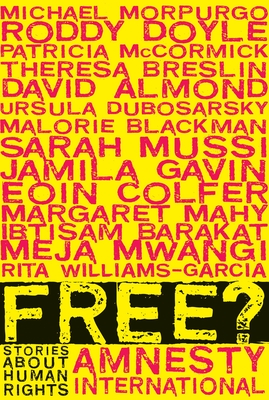 
In Stock—Click for Locations
What does it mean to be free? Top authors donate their talents to explore the question in a compelling collection to benefit Amnesty International.

A boy who thinks that school is "slavery" learns the true meaning of the word when he stumbles on a secret child-labor factory. A Palestinian boy, mute from trauma, releases kites over a wall to a hilltop settlement, each bearing a message of peace. This inspiring, engaging anthology gathers an international roster of authors to explore such themes as asylum, law, education, and faith — from a riveting tale of an attempt to find drinking water after Hurricane Katrina; to a chilling look at a future where microchips track every citizen’s every move; to a hilarious police interrogation involving the London Tower, the Crown Jewels, and a Ghanaian boy with a passion for playing marbles. Features an introduction by British writer Jacqueline Wilson.

With stories by:
David Almond
Ibtisam Barakat
Malorie Blackman
Theresa Breslin
Eoin Colfer
Roddy Doyle
Ursula Dubosarsky
Jamila Gavin
Margaret Mahy
Patricia McCormick
Michael Morpurgo
Sarah Mussi
Meja Mwangi
Rita Williams-Garcia
Amnesty International is a nonprofit organization that works to protect human rights around the world.
"Our book Free? is a reminder of what a huge leap was taken when someone wrote down our rights and the world agreed. And we want children to realize that the rights most of us can take for granted were won and struggled for." — David Almond — Quote