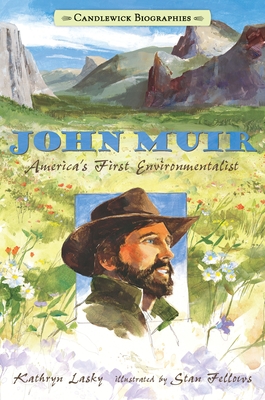 
Not On Our Shelves—Ships in 1-5 Days
"A useful introduction to Muir, the founding of the national parks, and the broader idea of environmentalism." — School Library Journal

John Muir loved the land. Born in 1838, he was a writer, a scholar, an inventor, a shepherd, a farmer, and an explorer. But above all, he was a naturalist. John Muir was particularly devoted to the high cliffs, waterfalls, and ancient giant sequoia trees that, through his careful influence, were set aside as Yosemite, one of the first national parks in America. Here is the life story of the man who, moved by a commitment to wilderness everywhere, founded the Sierra Club in 1892, a conservation group that carries on his crucial work to this day. Back matter includes an epilogue, a bibliography, and information about the Sierra Club.
Engaging . . . Muir’s passion and sense of adventure are beautifully rendered.
—Washington Parent

Lasky not only outlines the course of [Muir's] life, but eloquently conveys his motivation - a profound delight in what he called 'wildness' in the natural world.
—Kirkus Reviews

A good starting place for science and biography projects, this book will also appeal to young activists with its message about people needing 'beauty as well as bread.'
—Booklist