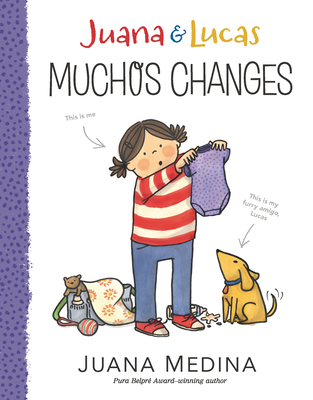 This is book number 3 in the Juana and Lucas series.

When she learns that Mami is expecting a baby, Juana finds a way to rise to the occasion (despite a few stumbles at skating camp!) in a third episode filled with humor and warmth.

I agree with my abuelos—I think I will be a VERY good older hermana. Even when I am not the most patient human being on earth. . . .

Juana’s life in Bogotá, Colombia, is just about perfect. Every now and then a big problema comes along—like having to learn English or Juana’s mami getting remarried—but things eventually settle down, and life goes back to feeling pretty perfect again. But then Mami springs two new sorpresas on Juana. One: Juana will be spending her school break going to skating camp instead of relaxing (even though she doesn’t know how to skate!). Two: Mami is going to have a baby! How can one Juana-size person possibly handle SO. MANY. CHANGES? The answer: with the gentle love of Mami and Luis, the guidance of Juana’s abuelos, the sympathy of newfound friends, the ready ear of her furry amigo Lucas, and Juana’s own expansive heart.
Juana Medina was born and grew up in Bogotá, Colombia. At school, she got into trouble for drawing cartoon versions of her teachers. Eventually, however, all that drawing (and trouble) paid off. Juana Medina is the author-illustrator of Juana & Lucas, which won the 2017 Pura Belpré Author Award, and Juana & Lucas: Big Problemas. She is also the author-illustrator of the picture books 1 Big Salad, ABC Pasta, and Sweet Shapes, and the illustrator of Smick! by Doreen Cronin, Lena’s Shoes Are Nervous: A First-Day-of-School Dilemma by Keith Calabrese, I’m a Baked Potato! by Elise Primavera, and Star of the Party by Jan Carr. Juana Medina lives with her family in the DC area.
Medina has created another winning addition to her early chapter-book series, which continues to introduce Spanish vocabulary and incorporate frequently hilarious illustrations to further support young readers. This story also tackles serious issues, such as pregnancy complications and the premature birth of a baby, but it does so in a kid-friendly way that acknowledges the emotions such experiences can cause. Another fantastic adventure with Juana.
—Booklist (starred review)

Medina’s marvelous, sprawling cartoon illustrations, occupying a full or sometimes double page, bring her characters and Bogota itself to life.
—The Buffalo News