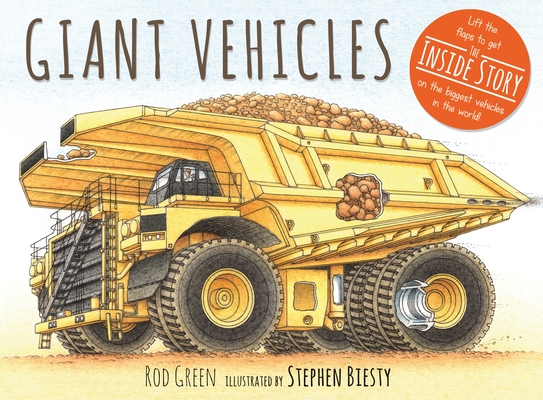 
Not On Our Shelves—Ships in 1-5 Days
Get up close to some monster machines with the master of the cross-section!

Internationally best-selling illustrator and undisputed master of the cross-section Stephen Biesty will have young readers enthralled by this lift-the-flap exploration of some of the world’s most enormous vehicles, including the double-decker Airbus, the biggest submarine on earth, the planet’s largest dump truck, and the most enormous helicopter ever to take to the air.
Rod Green is a children’s writer who has worked with many publishers, including Puffin and HarperCollins. With Templar, he has written books in the Mean Machines series.

Stephen Biesty has been illustrating since 1985. He has won several prestigious awards, including the New York Times Best Illustrated Children’s Book of the Year Award and the U.K. Literary Association Children’s Book Award.
A gallery of gargantuan delights guaranteed to leave young fans of mountainous machinery panting with pleasure.
—Kirkus Reviews

Green and Biesty explore the biggest of the big in this oversize book devoted to vehicles. ... Biesty’s detailed colored-pencil illustrations demonstrate how each machine operates, with labels and captions explaining how various components work together. An informative and appealing resource for readers with a serious interest in what makes things go.
—Publishers Weekly

The boardlike pages allow for lift-the-flap features, as many as seven per spread. Open the flap for a glimpse of what’s inside as well as a brief caption commenting on it. Children intrigued by the subject will pore over the handsome illustrations—intricately detailed pen-and-ink drawings with colored-pencil shading. An engaging, interactive learning experience.
—Booklist

Each spreads across the double page in a realistic drawing with some cutaway views and additional small sketches among surrounding bits of labeled text describing physical and mechanical features. Four or five flaps are embedded in each scene, lifting to show some internal detail and a brief explanation. ... Libraries might find it has appeal in browsing collections, and inventive teachers may find the size and weight comparisons useful.
—School Library Journal

Each double-page spread illustration is surrounded by insets and details, along with heaps of effective, economical explanation and jaw-dropping facts and stats. Lift the flaps (many rather cleverly concealed and requiring sensitive fingers to ferret out initially) for a peek not only into the interiors of the vehicles (so that’s where the engineer’s toilet is on the supertrain) but also at the structural materials, such as aluminum ribbing on the Airbus fuselage.
—Bulletin of the Center for Children's Books