Messenger: The Legend of Joan of Arc (Paperback) 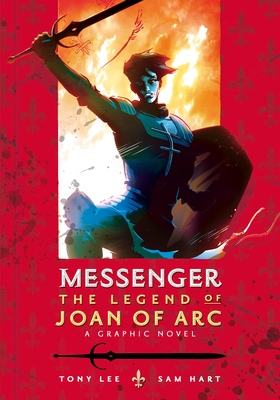 Messenger: The Legend of Joan of Arc (Paperback)


Special Order—Subject to Availability
Acclaimed graphic-novel creators Tony Lee and Sam Hart present a dynamic retelling of the heroic and tragic tale of Joan of Arc.

It is 1424. France and England have been fighting for more than a hundred years, and Jehanne D’Arc experiences her first saintly vision. Even her parents think she's delirious—until her next vision allows them to save the village. From a small town to the besieged city of Orleans and on to the cathedral of Reims, Joan follows her faith and leads the French to victory after victory. But not everyone believes in the divine voices she hears. Some call her heretic and want her burned at the stake. From the creators of Outlaw: The Legend of Robin Hood and Excalibur: The Legend of King Arthur comes a visually striking, action-packed story of a young woman facing her own fears, the men who lead her country, and her enemies’ deadly arrows to become a heroine whose name would be remembered for centuries to come.
The illustrations are dynamic, evoking the look of superhero comics and conveying, along with the text, Joan’s courage and heroism. Comic book fans and those interested in history will appreciate this work, which could complement a history curricula. This graphic novel is a fitting companion to Lee and Hart’s other historical works Excalibur: The Legend of King Arthur (2007) and Outlaw: The Legend of Robin Hood (2009, both Candlewick). An enlightening and accessible account of the life and death of Joan of Arc.
—School Library Journal (starred review)

This book reads like a heroic adventure and will appeal to any middle- or high-school student who likes historical fiction or military fiction, or anyone eager to read about a heroic young woman who truly made a difference.
—Booklist

Historical context is worked in effortlessly through both the illustrations and effective dialogue; text passages of philosophical, religious, political, and personal musings make Joan human rather than merely a historical cipher...Historical fiction buffs, even if they don’t normally grab graphic novels, will find this an impressive mix of truth and emotion.
—Bulletin of the Center for Children's Books

This book opens with the trial of Joan of Arc for heresy in 1431 and tells her story in a series of flashbacks. The narrative is told simply and without extensive background information that might bog down the plot...The story highlights a strong female figure noteworthy for her personal morality and self-sacrificing dedication to making her world a better place—something most graphic novel collections still need.
—School Library Connection