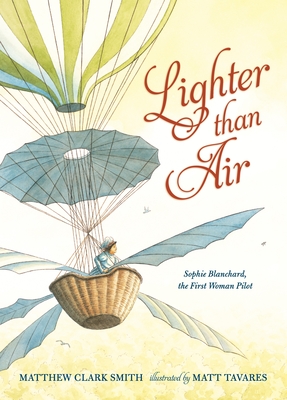 
Special Order—Subject to Availability
Take to the skies with the beautifully told tale of Sophie Blanchard — a woman meant for the air — as she discovers the incomparable sensation of flight.

Behold the story of Sophie Blanchard, an extraordinary woman who is largely forgotten despite her claim to being the very first female pilot in history. In eighteenth-century France, “balloonomania” has fiercely gripped the nation . . . but all of the pioneering aeronauts are men. The job of shattering that myth falls to a most unlikely figure: a shy girl from a seaside village, entirely devoted to her dream of flight. Sophie is not the first woman to ascend in a balloon, nor the first woman to accompany an aeronaut on a trip, but she will become the first woman to climb to the clouds and steer her own course. The words of Matthew Clark Smith bring Sophie’s story to light after so many years, while Matt Tavares’s atmospheric art and unique perspectives take her to new heights.
Matthew Clark Smith has a master’s degree in creative writing from Vermont College of Fine Arts. He lives in Jackson, Mississippi.

Matt Tavares has written and illustrated many books for children, including Crossing Niagara, Zachary's Ball, Oliver's Game, Mudball, Henry Aaron's Dream, There Goes Ted Williams, Becoming Babe Ruth, and Growing Up Pedro. He is also the illustrator of Alicia Potter’s Jubilee!, Doreen Rappaport’s Lady Liberty, and Kristin Kladstrup’s The Gingerbread Pirates. He lives in Ogunquit, Maine.
Smith tells Sophie’s inspiring story with a buoyant sense of wonder, fitting for a woman who was happiest in the air. Her accomplishments and passion for flight are brought beautifully to life by Tavares’ soft watercolor, gouache, and pencil illustrations... Sophie’s bravery and commitment to following her heart makes this an uplifting biography that proves the sky’s the limit when pursuing one’s dreams.
—Booklist (starred review)

This amazing tale of the first female pilot is illustrated in ink and watercolor, with the changing sky becoming a character itself. A story that needs to be shared. Pair this with Louise Borden and Mary Kay Kroeger’s Fly High!: The Story of Bessie Coleman to demonstrate that girls can reach their dreams.
—School Library Journal

The words are poetic and descriptive. The illustrations are airy and free, and one feels the sensation of flight throughout the text and illustrations. Since libraries and classrooms are anxious to purchase books referencing STEM activities, this book will surely be a hit. The book is historical as well as entertaining and full of information...This title is a must for all school libraries.
—School Library Connection