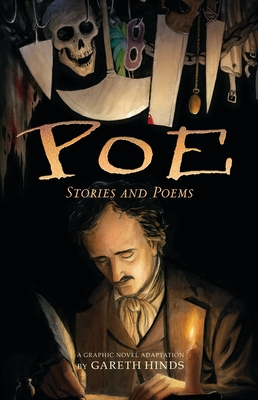 It is true that I am nervous. But why will you say that I am mad?

In “The Cask of Amontillado,” a man exacts revenge on a disloyal friend at carnival, luring him into catacombs below the city. In “The Masque of the Red Death,” a prince shielding himself from plague hosts a doomed party inside his abbey stronghold. A prisoner of the Spanish Inquisition, faced with a swinging blade and swarming rats, can’t see his tormentors in “The Pit and the Pendulum,” and in “The Tell-Tale Heart,” a milky eye and a deafening heartbeat reveal the effects of conscience and creeping madness. Alongside these tales are visual interpretations of three poems — “The Raven,” “The Bells,” and Poe’s poignant elegy to lost love, “Annabel Lee.” The seven concise graphic narratives, keyed to thematic icons, amplify and honor the timeless legacy of a master of gothic horror.
Gareth Hinds is the acclaimed creator of the graphic novels Macbeth, The Odyssey, Beowulf, Romeo and Juliet, The Merchant of Venice, and King Lear. Gareth Hinds lives near Washington, D.C.
Hinds adds to his impressive ­library of graphic novel adaptations with this collection of stories and poems...A spellbinding adaptation of one of America’s most legendary authors. This volume can easily be worked into literature courses and is a fantastic way to introduce Poe to new readers.
—School Library Journal (starred review)

Graphic-novel veteran Hinds turns his astute eye to Poe's best-known tales....Also included are historical notes about Poe and each vignette, making this volume equally valuable for classroom use or for independent reading. Befittingly dark, atmospheric, and evocative.
—Kirkus Reviews

Faithfully preserving the gothic tone of the original texts, from the macabre endpapers filled with symbols of death to the twisted anguished faces found throughout its pages, the author never shies away from the darkness found there, instead distilling Poe’s fascination with madness, death, and terror into single haunting images...A welcome addition for fans of graphic horror.
—Booklist

In a neat detail, each story opens with a legend indicating recurring themes (death, fire, and scary sounds in “The Bells”) so readers know what to expect; Hinds further reflects on and contextualizes each story in endnotes. Hinds doesn’t sugarcoat the blood and gore in these stories and poems—each haunting sequence is rife with tension and dread.
—Publishers Weekly

As always, Hinds’s adaptations lean heavily on the original language of the text with an eye toward accessibility for the modern reader and an understanding that the illustrations will carry a good portion of the narrative. Hinds’s varied illustrations are a good match for Poe’s atmospheric blend of horror and mystery.
—The Horn Book

This book makes a great introduction to Poe’s work, and will be a great addition to any school library’s graphic novel section.
—School Library Connection

Brilliant and terrifying, this collection shows in pictures much of what Poe revealed only through words.
—The Wall Street Journal