The Princess in Black and the Mysterious Playdate (Hardcover) 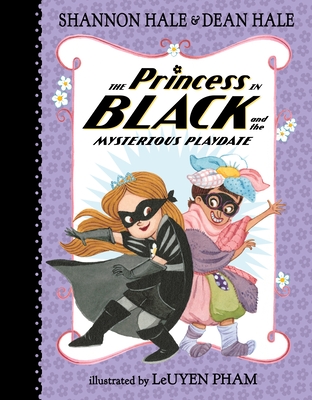 The Princess in Black and the Mysterious Playdate (Hardcover)

This is book number 5 in the Princess in Black series.

Noseholes and elephants! A pet-eating monster interrupts a perfect playdate with Princess Sneezewort . . . but who is that new masked avenger?

Princess Magnolia and Princess Sneezewort have plans . . . mysterious plans, like a princess playdate! They dress-up slam! They karaoke jam! They playhouse romp and snack-time stomp! But then a shout from outside Princess Sneezewort's castle interrupts their fun. It’s a monster trying to eat someone’s kitty! This is a job for the Princess in Black. Yet when the Princess in Black gets there, she finds only a masked stranger and no monster in sight . . . or is there? Action and humor abound in this ode to friendship that proves that when shape-shifting monsters intrude on your plans, two heroes are better than one.
Shannon Hale and Dean Hale are the award-winning husband-and-wife team behind the Princess in Black series, illustrated by LeUyen Pham. Shannon Hale is also the author of the Newbery Honor novel Princess Academy as well as the New York Times best-selling series Ever After High. Shannon Hale and Dean Hale live in Salt Lake City, Utah.

LeUyen Pham is the illustrator of many books for children, including God’s Dream by Archbishop Desmond Tutu and Douglas Carlton Abrams and Aunt Mary’s Rose by Douglas Wood. LeUyen Pham lives in California.
Pham’s colorful illustrations are pleasing as always; young readers will especially delight in locating the camouflaged monster in the art. With spot-on humor for its intended audience, this is sure to please series fans and newcomers alike.
—Booklist Online

It’s an adorable and humorous installment in the Princess in Black series that shows that not all heroes look the same and many skills are useful and needed.
—Deseret News

Even young readers who don’t like princesses will find much to admire in the Princess in Black. While she appears to be the model froufrou princess, Princess Magnolia has a secret life as the superhero Princess in Black, stealthily saving her kingdom from monsters and other villains.
—The Washington Post