Read Between the Lines (Paperback) 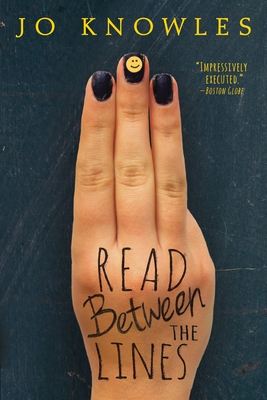 Read Between the Lines (Paperback)


Backordered
“One might think Knowles isn't creating but channeling the adolescent mind. A fascinating study of misperceptions, consequences, and the teen condition.” — Kirkus Reviews (starred review)

Thanks to a bully in gym class, unpopular Nate suffers a broken finger—the middle one, splinted to flip off the world. It won’t be the last time a middle finger is raised as ten voices speak loud and clear about the complex dance that is life in a small town. They resonate in a gritty and unflinching portrayal of a day like any other, with ordinary traumas, heartbreak, and revenge. But as on any given day, the line where presentation and perception meet is a tenuous one, hard to discern. Unless, of course, one looks a little closer—and reads between the lines.
The book proceeds, each new character entering, with his/her realities, dreams and secrets becoming another masterfully woven thread. With emotional explorations and dialogue so authentic, one might think Knowles isn't creating but channeling the adolescent mind. A fascinating study of misperceptions, consequences and the teen condition.
—Kirkus Reviews (starred review)

Achingly truthful... The short story format could tempt reluctant readers, and many young adults will see shadows of themselves in the well-drawn characters. Hand this one to fans of dramatic realistic fiction and those who enjoy slice-of-life novels.
—School Library Journal

The idea of looking past an angry gesture to understand what led to it makes for an empathetic approach to understanding random hostility. Teens who read these stories will likely never see a raised middle finger again without wondering what the story is behind it
—Publishers Weekly

Each (story) can be read and appreciated in isolation, but readers will enjoy piecing together the stories and the accompanying relationships.
—BookPage

The stories are all skillfully written ... may cause readers to think twice about the sentiment behind that sign.
—Bulletin of the Center for Children's Books

This is a poignant read that will leave readers thinking.
—School library Connection