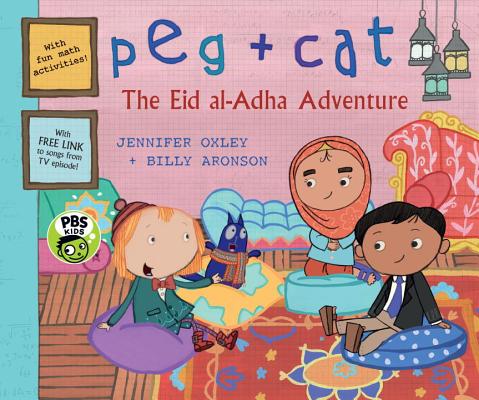 
Special Order—Subject to Availability
What happens when you take from where there's more and give to where there's less? While visiting friends Yasmina and Amir, Peg and Cat learn some surprising things about a holiday tradition.

It's Eid al-Adha, a very special holiday for Yasmina and Amir, who invite their friends Peg and Cat to check it out. After they all rock out with some singing, it’s time to head to the celebration, where there’s so much food waiting! Amir explains that an important part of celebrating Eid al-Adha is dividing the meat into three equal parts, one third to be shared with someone who has less. But with all three bowls of meatballs holding different amounts, they’ve got a BIG PROBLEM! Thanks to a balancing scale, a trip to a soup kitchen, and an unexpected visit to a housebound neighbor, Peg and Cat learn all about the concept of taking from where there’s more and giving to where there’s less. Even Cat discovers how awesome giving can be. Eid Mubarak!
Peg + Cat is the Emmy Award–winning animated TV series created by Jennifer Oxley and Billy Aronson and produced by The Fred Rogers Company. It has been honored with four Parents’ Choice Gold Awards for Television from 2014–2017.
The illustrations (assembled from the TV episode the book is based on) are cartoony and colorful, with graphing paper and mathematical equations in the background. Fans of Peg + Cat will enjoy learning about the Islamic holiday.
—Kirkus Reviews