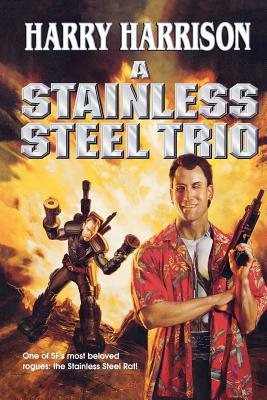 One of SF's most beloved rogues: the Stainless Steel Rat!

Slippery Jim DiGriz is the Stainless Steel Rat: the galaxy's greatest interstellar thief and con artist. For novel upon novel, the Rat has outfoxed the forces of conventionality, cutting a stylish swathe through dozens of star systems-and stealing the hearts of thousands of readers.

Now three of the Rat's greatest exploits are collected in a single volume. In A Stainless Steel Rat Is Born, we see the origin and early days of Jim DiGriz's brilliant criminal career, as our underworld hero is forced to work for the Good Guys. Conscripted again in The Stainless Steel Rat Gets Drafted, this time into a planetary army, the Rat must avenge the murder of his mentor-in-crime. And in The Stainless Steel Rat Sings the Blues, Slippery Jim must retrieve a missing alien artifact, while disguised as a futuristic rock-and-roller...or forfeit his life.