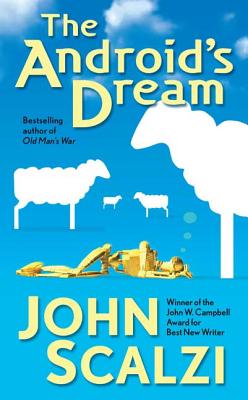 A human diplomat creates an interstellar incident when he kills an alien diplomat in a most . . . unusual . . . way. To avoid war, Earth's government must find an equally unusual object: a type of sheep ("The Android's Dream"), used in the alien race's coronation ceremony.

To find the sheep, the government turns to Harry Creek, ex-cop, war hero and hacker extraordinare, who, with the help of a childhood friend turned artificial intelligence, scours the earth looking for the rare creature.
But there are others with plans for the sheep as well. Mercenaries employed by the military. Adherents of a secret religion based on the writings of a 21st century SF author. And alien races, eager to start a revolution on their home world and a war on Earth.

To keep our planet from being enslaved, Harry will have to pull off a grand diplomatic coup, a gambit that will take him from the halls of power to the lava-strewn battlefields of alien worlds. There's only one chance to get it right, to save the life of the sheep—and to protect the future of humanity.

The Interdepency Sequence
1. The Collapsing Empire
2. The Consuming Fire

JOHN SCALZI is one of the most popular SF authors of his generation. His debut Old Man's War won him the John W. Campbell Award for Best New Writer. His New York Times bestsellers include The Last Colony, Fuzzy Nation,and Redshirts (which won the 2013 Hugo Award for Best Novel), and 2020's The Last Emperox. Material from his blog, Whatever, has also earned him two other Hugo Awards. Scalzi also serves as critic-at-large for the Los Angeles Times. He lives in Ohio with his wife and daughter.

“Gripping and surpassingly original. It's Starship Troopers without the lectures. It's The Forever War with better sex. It's funny, it's sad, and it's true.” —Cory Doctorow on Old Man's War

“Astonishingly proficient…This virtuoso debut pays tribute to SF's past while showing that well-worn tropes still can have real zip when they're approached with ingenuity.” —Publishers Weekly (starred review) on Old Man's War

“Solid…[Scalzi] sidesteps most of the cliches of military science fiction, delivers fast-paced scenes of combat and pays attention to the science underpinning his premise.” —San Francisco Chronicle on Old Man's War