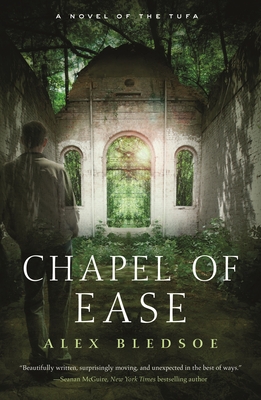 This is book number 4 in the Tufa Novels series.

When Matt Johansson, a young New York actor, auditions for Chapel of Ease, an off-Broadway musical, he is instantly charmed by Ray Parrish, the show's writer and composer. They soon become friends; Matt learns that Ray's people call themselves the Tufa and that the musical is based on the history of his isolated home town. But there is one question in the show's script that Ray refuses to answer: what is buried in the ruins of the chapel of ease?

As opening night approaches, strange things begin to happen. A dreadlocked girl follows Ray and spies on him. At the press preview, a strange Tufa woman warns him to stop the show. Then, as the rave reviews arrive, Ray dies in his sleep.

Matt and the cast are distraught, but there's no question of shutting down: the run quickly sells out. They postpone opening night for a week and Matt volunteers to take Ray's ashes back to Needsville. He also hopes, while he's there, to find out more of the real story behind the play and discover the secret that Ray took to his grave.

Matt's journey into the haunting Appalachian mountains of Cloud County sets him on a dangerous path, where some secrets deserve to stay buried.

ALEX BLEDSOE is the author of the Eddie LaCrosse novels (The Sword-Edged Blonde, Burn Me Deadly, Dark Jenny, and Wake of the Bloody Angel), the novels of the Tufa (The Hum and Shiver, Wisp of a Thing, Long Black Curl, and Chapel of Ease), and the Memphis Vampires (Blood Groove and Girls with Games of Blood). Bledsoe grew up in Memphis, Tennessee. He now lives in Madison, Wisconsin.

"With his subtle, character-driven approach, Bledsoe skillfully fuses music, legend, and regional atmosphere to create something that feels like an unexplored corner of American mythology." – Publishers Weekly

“Always effectively subtle in how it employs the supernatural, with music central to the magic of the Tufa.” —Library Journal

“A fine installment in the popular series and a fine way for newcomers to join in the fun.” —Booklist

“This book is a graceful merging of magic and mundane that charmed me to my core.” —Bookworm Blues

Praise for the Tufa books:

“Long Black Curl makes me so happy that there are authors writing real North American-based mythic fiction...one that sits so well it feels like it's always been a part of us.” —Charles de Lint

“Beautifully written, surprisingly moving, and unexpected in the best of ways.” —Seanan McGuire, New York Times bestselling author, on Wisp of a Thing

“Captures the allure and the sometimes sinister beauty of the Appalachian backwoods.” —Library Journal, starred review, on Wisp of a Thing

“It's no secret that music stirs the soul, and combining that with a folk-tale setting makes a deeply heart-rending novel." —RT Book Reviews (four stars) on Long Black Curl

“Haunting. . . . It's a mixture: folk tales and folk songs, updated with a dose of Sex and the City. Or, you might say, a rustic version of 'urban fantasy,' with its suggestion that there's mystery just around the corner, hidden behind even the dullest small-town facade.” —The Wall Street Journal on The Hum and the Shiver

“A lot of fun." —Booklist on Long Black Curl