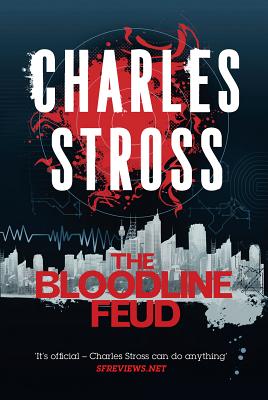 This is book number 1 in the Merchant Princes series.

The Bloodline Feud: an omnibus edition of the first two novels in Charles Stross's The Merchant Princes series

The six families of the Clan rule the kingdom of Gruinmarkt from behind the scenes. They are a mixture of nobility and criminal conspirators whose power to walk between their world and ours makes them rich in both.

Miriam, a hip tech journalist from Boston, discovers her alternate-world relatives with explosive results that shake three worlds. Now, as the prodigal Countess Helge Thorold-Hjorth, she finds herself ensnared in schemes and plots centuries in the making. She is surrounded by unlikely allies, lethal contraband, and—most dangerous of all—her family.

To avoid a slippery slope down to an unmarked grave, Miriam must build a power base of her own—with unexpected consequences for three different time lines, including the quasi-Victorian one exploited by the hidden family.

CHARLES STROSS (he/him) is a full-time science fiction writer and resident of Edinburgh, Scotland. He has won three Hugo Awards for Best Novella, including for the Laundry Files tale “Equoid.” His work has been translated into over twelve languages. His novels include the bestselling Merchant Princes series, the Laundry series (including Locus Award finalist The Dilirium Brief), and several stand-alones including Glasshouse, Accelerando, and Saturn's Children.

Like many writers, Stross has had a variety of careers, occupations, and job-shaped catastrophes, from pharmacist (he quit after the second police stakeout) to first code monkey on the team of a successful dot-com startup (with brilliant timing, he tried to change employers just as the bubble burst) to technical writer and prolific journalist covering the IT industry. Along the way he collected degrees in pharmacy and computer science, making him the world’s first officially qualified cyberpunk writer.

“Stross brings to fantasy the same kind of sly humor and clear–eyed extrapolation that he previously brough to space opera and horror...presented with great wit and high suspense.” —San Francisco Chronicle on The Merchant Princes series

“A marvelous romp through this world and others, told by a master of the imaginative thrill-ride.” —Karl Schroeder on The Merchant Princes series

“A fantastically thrilling series.” —Booklist on The Merchant Princes series

“Totally off the wall and delightful.” —Anne McCaffrey on The Merchant Princes series

“An alternate world that is fascinating and original...it's simply a great adventure, full of danger, of plots within plots, of forbidden love and political murder.” —Orson Scott Card on The Merchant Princes series

“Stross gives us an escape fanatsy that is most seductive , indeed.” —Salon.com on The Merchant Princes series

“Fans of the author’s previous work will recognize his trademark skill at world building—you can almost see the filth on the streets of New England, feel the closeted oppression of the Clan hierarchy, and experience Miriam’s terror at the horrifying circumstances she finds herself in.” —SciFiNow on The Merchant Princes series

“A rollicking, pacy read and delivers on the fun.” —Interzone