The Librarians and the Mother Goose Chase (Paperback) 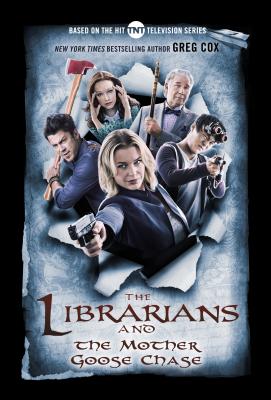 The Librarians and the Mother Goose Chase (Paperback)

This is book number 2 in the The Librarians series.

The Librarians and the Mother Goose Chase, an original novel based on the hit television show, The Librarians by New York Times bestselling author, Greg Cox.

For millennia, the Librarians have secretly protected the world by keeping watch over dangerous magical relics. Cataloging and safeguarding everything from Excalibur to Pandora’s Box, they stand between humanity and those who would use the relics for evil.

In 1719, Elizabeth Goose published a collection of rhyming spells as a children's book, creating a spellbook of terrifying power. The Librarian of that age managed to dispose of all copies of the book except one, which remained in the possession of Elizabeth Goose and her family, temporarily averting any potential disaster.

Now, strange things are happening around the world. A tree-trimmer in Florida is blown off his elevated perch by a freak gust of wind, a woman in rural Pennsylvania is attacked by mutant rodents without any eyes, and a college professor in England finds herself trapped inside a prize pumpkin at a local farmer’s market. Baird and her team of Librarians suspect that the magic of Mother Goose is again loose in the world, and with Flynn AWOL—again—it is up to Cassandra, Ezekiel, and Stone to track down the missing spellbook before the true power of the rhymes can be unleashed.

GREG COX is the New York Times Bestselling author of numerous books and short stories. He has written the official movie novelizations of such films as Godzilla, Man of Steel, and The Dark Knight Rises. He has also written tie-in novels based on such popular TV series as Alias, CSI: Crime Scene Investigation, The 4400, Leverage, Star Trek, and Warehouse 13.