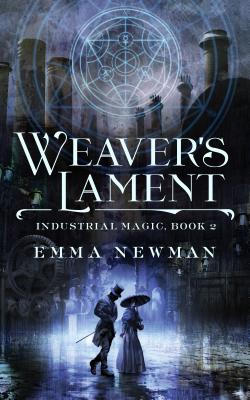 This is book number 2 in the Industrial Magic series.

Charlotte is learning to control her emerging magical powers under the secret tutelage of Magus Hopkins.

Her first covert mission takes her to a textile mill where the disgruntled workers are apparently destroying expensive equipment.

And if she can’t identify the culprits before it’s too late, her brother will be exiled, and her family dishonoured…

EMMA NEWMAN writes dark short stories and science fiction and urban fantasy novels. Between Two Thorns, the first book in Emma’s acclaimed Split Worlds urban fantasy series, was shortlisted for the British Fantasy Awards for Best Novel and Emma was nominated for Best Newcomer. She is also the author of Planetfall.

Emma is a professional audio book narrator and also co-writes and hosts the Hugo-nominated podcast ‘Tea and Jeopardy’ which involves tea, cake, mild peril and singing chickens. Her hobbies include dressmaking and role playing games.

"A gripping story full of charm and adventure. Newman manages to keep her readers tense and delighted at the same time." — Gail Carriger, New York Times Bestselling author of the Parasol Protectorate series.

“Newman reworks the familiar idea of magical schools, breathing some new life into the premise by exploring the darker corners of London and their murky morality.” — Publishers Weekly