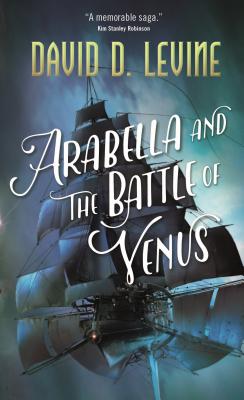 This is book number 2 in the The Adventures of Arabella Ashby series.

Arabella’s wedding plans to marry Captain Singh of the Honorable Mars Trading Company are interrupted when her fiancé is captured by the French and sent to a prisoner-of-war camp on swampy Venus. Now, Arabella must find passage to an enemy-controlled planet in the middle of a war, bribe or fight her way past vicious guards, and rescue her Captain.

To do this she must enlist the help of the dashing privateer, Daniel Fox of the Touchstone and build her own clockwork navigational automaton in order to get to Venus before the dread French general, Joseph Fouché, the Executioner of Lyon.

Once on Venus, Arabella, Singh, and Fox soon discover that Napoleon has designed a secret weapon, one that could subjugate the entire galaxy if they can’t discover a way to stop Fouché, and the entire French army, from completing their emperor’s mandate.

David D. Levine is the author of novel Arabella of Mars and over fifty science fiction and fantasy stories. His story "Tk'Tk'Tk"won the Hugo Award, and he has been shortlisted for awards including the Hugo, Nebula, Campbell, and Sturgeon. His stories have appeared in Asimov's, Analog, F&SF, numerous Year's Best anthologies, and his award-winning collection Space Magic.

He lives in a hundred-year-old bungalow in Portland, Oregon.

"Wits and cleverness save the ship and crew more than once in this rousing swashbuckler." —Publishers Weekly,starred review, on Arabella of Mars

“David Levine’s entertaining debut is a delightfully detailed airship adventure, complete with romance, pirates, Martians, automata, and a charming Jules Vernian imagining of the alternate-world science involved in sailing a ship straight through our solar system.” —Tina Connolly, author of the Ironskin Trilogy and Seriously Wicked