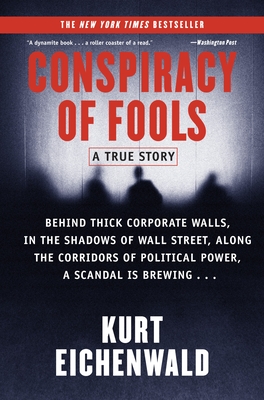 
Not On Our Shelves—Ships in 1-5 Days
From an award-winning New York Times reporter comes the full, mind-boggling true story of the lies, crimes, and ineptitude behind the Enron scandal that imperiled a presidency, destroyed a marketplace, and changed Washington and Wall Street forever.

It was the corporate collapse that appeared to come out of nowhere. In late 2001, the Enron Corporation—a darling of the financial world, a company whose executives were friends of presidents and the powerful—imploded virtually overnight, leaving vast wreckage in its wake and sparking a criminal investigation that would last for years.

Kurt Eichenwald transforms the unbelievable story of the Enron scandal into a rip-roaring narrative of epic proportions, taking readers behind every closed door—from the Oval Office to the executive suites, from the highest reaches of the Justice Department to the homes and bedrooms of the top officers. It is a tale of global reach—from Houston to Washington, from Bombay to London, from Munich to Sao Paolo—laying out the unbelievable scenes that twisted together to create this shocking true story.

Eichenwald reveals never-disclosed details of a story that features a cast including George W. Bush, Dick Cheney, Paul O’Neill, Harvey Pitt, Colin Powell, Gray Davis, Arnold Schwarzenegger, Alan Greenspan, Ken Lay, Andy Fastow, Jeff Skilling, Bill Clinton, Rupert Murdoch and Sumner Redstone. With its you-are-there glimpse into the secretive worlds of corporate power, Conspiracy of Fools is an all-true financial and political thriller of cinematic proportions.
Kurt Eichenwald wrote for the New York Times for more than twenty years before becoming a senior writer for Newsweek. A two-time winner of the George Polk Award for excellence in journalism and a finalist for the 2000 Pulitzer Prize, he has been selected repeatedly for the TJFR Business News Reporter as one of the nation’s most influential financial journalists. His book, The Informant was turned into a major motion picture. He lives in Dallas with his wife and three children.
Praise for Kurt Eichenwald’s bestseller, The Informant:

“Ranks with A Civil Action as one of the best nonfiction books of the last decade.”
—New York Times Book Review

“The thriller of the year—and it’s all true!”
—Dallas Morning News

“One of the most intriguing—and nearly unbelievable—nonfiction books in recent memory . . . a tangled tale worthy of John Le Carré.”
—Portland Oregonian

“A spellbinding account, as much of a page-turner as a Grisham novel.”
—Washington Monthly

“I guarantee it’ll keep you reading late into the night.”
—Jonathan Harr, author of A Civil Action