The Galactic Quests of Captain Zepto: Issue 2: Disturbance in the Galaxy (Paperback) 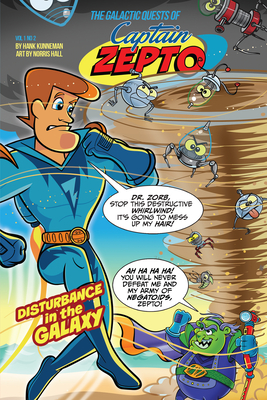 The Galactic Quests of Captain Zepto: Issue 2: Disturbance in the Galaxy (Paperback)

The dastardly Dr. Zorb has a new trick up his sleeve... he is sending out his army of negatoids to bring misery to people all over the earth. Captain Zepto and the Light Brigade are the only ones who stand in the way of the imminent destruction of kids and families across the globe

Using their fast thinking, space gadget skills, and Zepto's giant hair dryer, the crew is determined to stop Dr. Zorb. But will the evil doctor's plan prove to be too strong for them this time? Will their powers be able to stand up against these destructive pests? ...And will Zepto step away from the mirror long enough to fight?

Hank Kunneman has had a passion for cartooning and art since childhood. While he has authored numerous books for adults, he has also created many children's characters that come to life with biblical principles and lessons that all ages can enjoy. He and his wife, Brenda, pastor Lord of Hosts Church in Omaha, Nebraska. Their weekly show, New Level with Hank and Brenda, airs nationally and internationally, and reaches millions around the world.Norris Hall has illustrated several children's books and his work has been displayed in galleries, museums, and commercial spaces across the United States. His clients include Disneyland Paris, AT&T, Tennessee Performing Arts Center, Nashville International Airport, and numerous schools, libraries, and doctors' offices. He resides near Nashville, Tennessee with his wife, Linda.