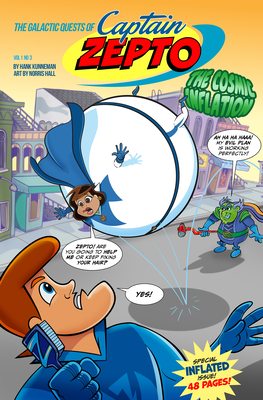 It's inflation of cosmic proportions

Doctor Zorb is up to his old tricks. This time he devises a sinister plot that is irresistible to almost everyone.

Hank Kunneman has had a passion for cartooning and art since childhood. While he has authored numerous books for adults, he has also created many children's characters that come to life with biblical principles and lessons that all ages can enjoy. He and his wife, Brenda, pastor Lord of Hosts Church in Omaha, Nebraska. Their weekly show, New Level with Hank and Brenda, airs nationally and internationally, and reaches millions around the world.Norris Hall has illustrated several children's books and his work has been displayed in galleries, museums, and commercial spaces across the United States. His clients include Disneyland Paris, AT&T, Tennessee Performing Arts Center, Nashville International Airport, and numerous schools, libraries, and doctors' offices. He resides near Nashville, Tennessee with his wife, Linda.