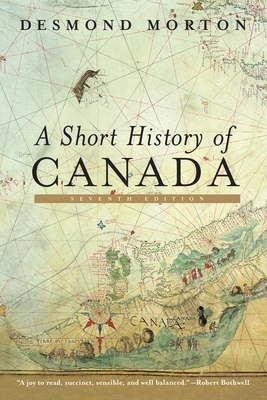 
Special Order—Subject to Availability
A fully updated edition of the Canadian classic.

Most of us know bits and pieces of our history but would like to be more sure of how it all fits together. The trick is to find a history that is so absorbing you will want to read it from beginning to end. With this expanded, seventh edition of A Short History of Canada, readers need look no further.
Desmond Morton, one of Canada's most highly respected historians, is keenly aware of the ways in which our past informs the present, and in one compact and engrossing volume, he pulls off the remarkable feat of bringing it all together -- from the First Nations before the arrival of the Europeans, to Confederation, to Stephen Harper's prime ministership, to Justin Trudeau's victory in the 2015 election. His acute observations on the Diefenbaker era, the effects of the post-war influx of immigrants, the Trudeau years and the constitutional crisis, the Quebec referendum, the rise of the Canadian Alliance, and Canada under Harper's governance, all provide an invaluable background to understanding the way Canada works today and its direction in years to come.
The former director of the McGill Institute for the Study of Canada in Montreal, Desmond Morton was appointed a professor of history at the University of Toronto in 1969 and became Principal of its Erindale campus. He is the author of thirty-six books on Canada and is a contributor to the CBC, Radio-Canada, the Montreal Gazette, and the Ottawa Citizen. He lives in Montreal. The author lives in Montreal.
Praise for A Short History of Canada:
• "What extends the attractiveness of A Short History of Canada to the general reader is Morton's capacity as a first-rate storyteller." --Toronto Star
• "Had such a book been available a generation ago, the canard that Canadian history is dull might never have got off the ground." --Montreal Gazette