Too Young to Fight: Memories from Our Youth During World War II (Hardcover) 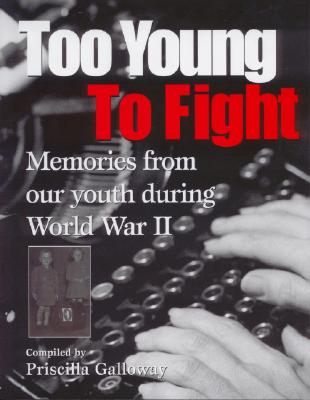 Too Young to Fight: Memories from Our Youth During World War II (Hardcover)

Too Young To Fight is a book of recollections from some of this country's best-loved writers of children's literature. The contributors were children and teenagers during World War II. Though they were far from the fighting and, indeed, too young to participate, they were old enough to remember their impressions and feelings. As they grew up in a tumultuous era, some seemed miraculously untouched while others were profoundly affected. All experienced changes in their lives that shaped the adults they became.

For anyone who did not experience it, this book provides fascinating insight and a tangible link to a formative period in our history. For those who were young themselves at the time, the collection will stir memories and stories long-forgotten. It is our hope that those memories will be shared by people of all ages, and preserved for generations to come.

Priscilla Galloway is a Fitzhenry and Whiteside author. Dorothy Joan Harris was born in Kobe, Japan on February 14, 1931, and came to Canada in 1938. She graduated from the University of Toronto in modern languages, then taught in France and Japan. In 1955, she married Alan Harris, settled in Toronto, and was editor with Copp Clark Publishers. She began writing for her two children, Kim and Doug, and has gone on to write for other people's children. A writer of international acclaim, Monica Hughes published over 35 books and many more short stories and articles during her 29-year career. She was often honored for her work; Hunter in the Dark and Keeper of the Isis Light both won the Canada Council Children's Literature Award. She was the recipient of the Vicky Metcalfe Award for a body of work, the Queen's Jubilee Medal and the Order of Canada. Joy Kogawa was born in Vancouver in 1935. Like Naomi, Kogawa and her family were sent to internment camps in Slocan, British Columbia and later to Coaldale, Alberta during the Second World War. After teaching in Coaldale after the war, she eventually moved to Toronto, Ontario, where she lives today. Kogawa is a recipient of numerous honorary doctorates as well as national and international awards for her writing. In 1986, Kogawa was named a Member of the Order of Canada.