Comic Books and the Cold War, 1946-1962: Essays on Graphic Treatment of Communism, the Code and Social Concerns (Paperback) 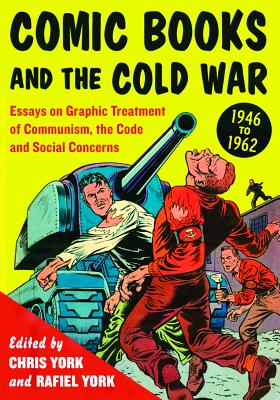 Comic Books and the Cold War, 1946-1962: Essays on Graphic Treatment of Communism, the Code and Social Concerns (Paperback)


Not On Our Shelves—Ships in 1-5 Days
Conventional wisdom holds that comic books of the post-World War II era are poorly drawn and poorly written publications, notable only for the furor they raised. Contributors to this thoughtful collection, however, demonstrate that these comics constitute complex cultural documents that create a dialogue between mainstream values and alternative beliefs that question or complicate the grand narratives of the era. Close analysis of individual titles, including EC comics, Superman, romance comics, and other, more obscure works, reveals the ways Cold War culture--from atomic anxieties and the nuclear family to communist hysteria and social inequalities--manifests itself in the comic books of the era. By illuminating the complexities of mid-century graphic novels, this study demonstrates that postwar popular culture was far from monolithic in its representation of American values and beliefs.
Chris York has taught English at Pine Technical College in Pine City, Minnesota. He has been an active participant in the Comics and Comic Art Area at the National Popular Culture Association Conference for nearly a decade, and his comics scholarship has appeared in the International Journal of Comic Art. Rafiel York is a teacher in Jackson, Minnesota.