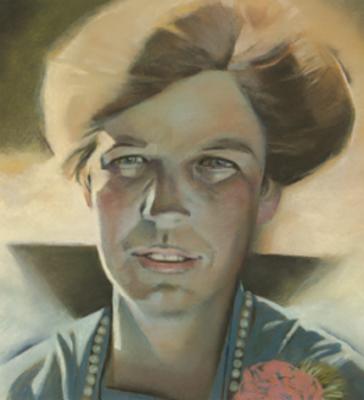 This is book number 4 in the A Big Words Book series.

A stunning portrait of beloved first lady Eleanor Roosevelt, by the award-winning author of the Big Words series.

Eleanor Roosevelt was raised in a privileged but stern Victorian household, with an affectionate but mostly absent father and a critical mother who made fun of her daughter's looks. Alone and lonely for much of her childhood, Eleanor found solace in books and in the life of her lively and independent mind. Her intellectual gifts and compassionate heart won her the admiration of many friends—and the love of her future husband, Franklin Delano Roosevelt. While other young women of her class were spending time at dances and parties, Eleanor devoted her energies to teaching children in New York City's poorest neighborhoods. Later, she became the most socially and politically active—and controversial—First Lady America had ever seen. Ambassador, activist, and champion of civil rights, Eleanor Roosevelt changed the soul of America forever.

In her eloquent prose, Doreen Rappaport captures the essence of Eleanor's character and the deep significance of her legacy. With beautiful paintings by Gary Kelley and selections from Eleanor's own writings, Eleanor, Quiet No More is an extraordinary tribute to an extraordinary American.
Doreen Rappaport has written numerous award-winning books for children, including Freedom Ship and The School Is Not White (both illustrated by Curtis James); Martin's Big Words: The Life of Dr. Martin Luther King, Jr., a Caldecott Honor Book and Coretta Scott King Honor Book illustrated by Bryan Collier; and John's Secret Dreams: The Life of John Lennon, also illustrated by Bryan Collier.

Gary Kelley is well-known for both his fine art and his illustration work. He has received awards from the New York Society of Illustrators (including twenty-seven gold and silver medals), American Booksellers Association, Print magazine, Los Angeles Society of Illustrators, the Bologna Book Fair, and others. His clients include the New Yorker magazine, Rolling Stone, and many major publishers and advertising agencies. Mr. Kelley lives in Cedar Falls, Iowa.
* "Once again Rappaport celebrates a noble, heroic life in powerful, succinct prose, with prominent, well-chosen, and judiciously placed quotes that both instruct and inspire."—School Library Journal, starred review

* "An exciting introduction to a well-loved leader."—Booklist, starred review