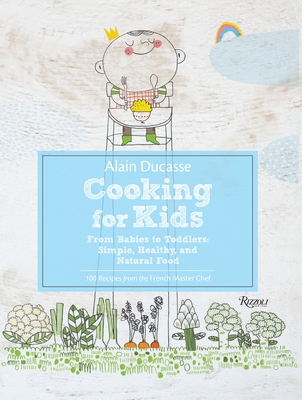 
Special Order—Subject to Availability
Alain Ducasse presents parents with the keys to giving young children healthy food. Alain Ducasse is one of France's best-known chefs and well known for his devotion to healthful eating, as demonstrated in his critically acclaimed and best-selling book Alain Ducasse Nature. Now the multi-Michelin-starred chef goes back to basics and rediscovers the pleasures of preparing simple, locally sourced, natural food for children, from ages 6 months to 3 years. The simple yet delicious dishes included here highlight a range of flavor combinations in which vegetables, fruits, and grains take pride of place, while animal protein is used sparingly. Ducasse casts aside preconceived notions of baby food to reveal that its essence should be composed of the same essential ingredients used in food for adults-locally sourced, seasonal produce and fresh flavors based on a simplified repertoire of recipes without the additives and preservatives found in commercial baby food. Charts, sidebars, and asides containing useful snippets of Ducasse's experience and nutritionist Paule Neyrat's advice are peppered throughout the charmingly illustrated recipes, making for a book that is both useful and beautiful for every parent wishing to start their children out with good eating habits.
Alain Ducasse is one of the most renowned chefs of his generation. He is also a restaurant designer, hotelier, and teacher of the culinary arts. Over thirty years, he has developed a unique savoir faire, which has helped define the contemporary art of living and eating. He is the first chef worldwide whose restaurants have been awarded three Michelin stars in two different cities. Paule Neyrat has been working in nutrition and gastronomy for fifteen years and has collaborated with Alain Ducasse on previous books in the Nature series.