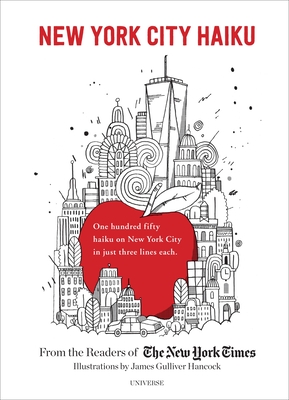 
Not On Our Shelves—Ships in 1-5 Days
One hundred fifty
haiku on New York City
in just three lines each.

New York City Haiku collects 150 of the best haiku inspired by the Big Apple. These succinct three-line poems express not only the personal experiences of every New Yorker (or New Yorker at heart), but also the universal truths about living and loving everything that New York has to offer as well.

Written by poets of all ages and from across the country, this affordable and giftable collection creates an honest and often hilarious volume chronicling what New York is all about. A must-have for anyone who aspires to “make it there,” New York City Haiku is a thoughtful and fun testament to the city and its people.
The New York Times is a daily newspaper published in New York City and
distributed internationally. Founded in 1851, the newspaper has won 95 Pulitzer Prizes, more than any other newspaper.

James Gulliver Hancock is an internationally noted illustrator of print ads and The Bowtie Book, and author of books including All the Buildings in New York.