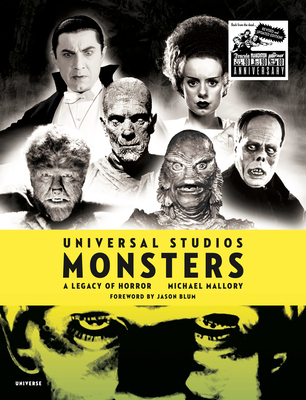 
Not On Our Shelves—Ships in 1-5 Days
This updated volume is the perfect gift for any fan of horror movies and pop culture’s most iconic monsters.


The year 2021 is a milestone anniversary year for horror’s most iconic films—Universal Studios’ Dracula, Frankenstein, and The Wolf Man. Those landmark movies—as well as Universal’s new releases—are celebrated through this beautiful and frighteningly informative volume, newly expanded to include what the present and future holds for these venerable characters. With a foreword by Jason Blum that places horror in the context of our modern culture, the monster movie is new again—and no fan can afford to be without this book.

From the 1920s through the 1950s, Universal Studios was Hollywood’s number one studio for horror pictures worldwide. This official illustrated history is the comprehensive and definitive volume of cinema’s most enduring genre. Lavishly illustrated with production stills, posters, and rare behind-the-scenes shots, the book tells the complete history of these fascinating characters and the captivating films through which they achieved international recognition. Universal Studios Monsters: A Legacy of Horror is a one-book library on horror films.

Michael Mallory is a recognized authority on twentieth-century pop-culture subjects, and the author of such books as The Vampire Diaries, Essential Horror Movies, and Marvel: The Characters and Their Universe. He has written more than 600 newspaper and magazine articles and is an award-winning fiction author. Emmy Award–winning producer Jason Blum is the founder and CEO of Blumhouse Productions, which has produced Paranormal Activity, The Purge, Insidious, and Sinister franchises, as well as The Invisible Man.