Zen and the Art of Postmodern Philosophy: Two Paths of Liberation from the Representational Mode of Thinking (Hardcover) 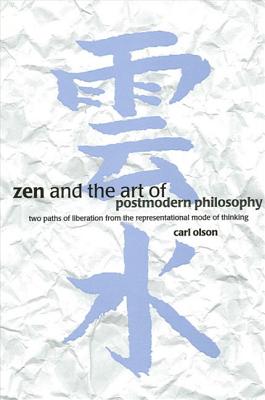 Zen and the Art of Postmodern Philosophy: Two Paths of Liberation from the Representational Mode of Thinking (Hardcover)


Special Order—Subject to Availability
This book examines and compares the philosophical positions of various postmodern thinkers and Zen Buddhist philosophers on: language and play; modes of thinking; skepticism and doubt; self and other; time and death; nihilism and metaphysics; and the conception of the end of philosophy. The Zen thinkers dealt with are Dogen and Nishitani, and the Western thinkers are Derrida, Lacan, Heidegger, Lyotard, Foucault, Deleuze and Guatarri, Kristeva, and Levinas. Although each share similar notions concerning the shortcomings of representational thinking, major differences still exist. By clarifying these differences, Olson counters the tendency to overtly assert or covertly imply that postmodern and Zen philosophies are moving in the same direction. Some postmodern thinkers and Zen Buddhist philosophers share common philosophical ground with regard to a mutual philosophical attack and attempt to overcome the perceived shortcomings of the representational mode of thinking that conceives of the mind like a mirror and assumes a correspondence between appearance and reality that is supported by a metaphysical structure.
Carl Olson is Professor of Religious Studies at Allegheny College in Pennsylvania. His previous books include The Indian Renouncer and Postmodern Poison: A Cross-Cultural Encounter and The Theology and Philosophy of Eliade: A Search for the Centre.