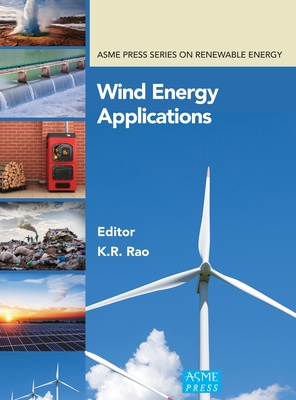 This third volume of the new ASME Press Book Series on Renewable Energy also edited by Dr. Rao and published by ASME Press is based on updated chapters from the classic 2011 Handbook of Energy and Power Generation in addition to a new chapter appropriate for the title of this book. The discussions in this book update Wind Energy since the publication of 2011 Handbook by Dr. Rao in Chapters 1, 2, 3 and 4. Since the coverage in the 2011 Handbook is considered applicable even for the present it is retained in total with the contributions for original authors for Chapters 1, 2, 3 and 4 an update for Chapter 6, 7, 8 and 9 of the 2011 Handbook.

Chapter 5, an update of Chapter 10 of the 2011 Handbook is titled as before in the 2011 Handbook, "Role of Wind Energy Technology in India and Neighboring Countries" by original author M.P. Ramesh and finally the last Chapter 6 is a new Chapter "Artificial Intelligence in Wind Energy" by Dr. Weifei Hu.

The book contains over 200 pages with 28 tables, 143 figures, 379 footnotes and over 102 additional references in this updated version. The book has an index as before in the original edition, to help users easily navigate through the text and graphics.