Galileo's Logic of Discovery and Proof: The Background, Content, and Use of His Appropriated Treatises on Aristotle's Posterior Analytics (Boston Studies in the Philosophy and History of Science #137) (Hardcover) 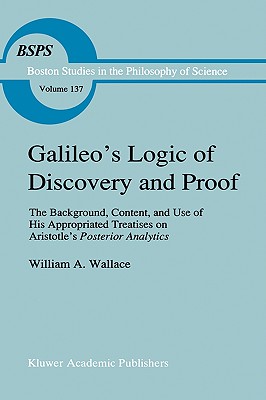 Galileo's Logic of Discovery and Proof: The Background, Content, and Use of His Appropriated Treatises on Aristotle's Posterior Analytics (Boston Studies in the Philosophy and History of Science #137) (Hardcover)

By William A. Wallace


Not On Our Shelves—Ships in 1-5 Days
(This book cannot be returned.)
This volume is presented as a companion study to my translation of Galileo's MS 27, Galileo's Logical Treatises, which contains Galileo's appropriated questions on Aristotle's Posterior Analytics - a work only recently transcribed from the Latin autograph. Its purpose is to acquaint an English-reading audience with the teaching in those treatises. This is basically a sixteenth-century logic of discovery and of proof about which little is known in the present day, yet one that arguably guided the most significant research program of the seventeenth century. Despite its historical and systematic importance, the teaching is difficult to explain to the modern reader. Part of the problem stems from the fragmentary nature of the manuscript in which it is preserved, part from the contents of the teaching itself, which requires a considerable propadeutic for its comprehension. A word of explanation is thus required to set out the structure of the volume and to detail the editorial decisions that underlie its organization. Two major manuscript studies have advanced the cause of scholarship on Galileo within the past two decades. The first relates to Galileo's experimental activity at Padua prior to his discoveries with the telescope that led to the publication of his Sidereus nuncius in 1610. Much of this activity has been uncovered by Stillman Drake in analyses of manuscript fragments associated with the composition of Galileo's Two New Sciences, fragments now bound in a codex identified as MS 72 in the collection of Galileiana at the Biblioteca Nazionale Centrale in Florence.