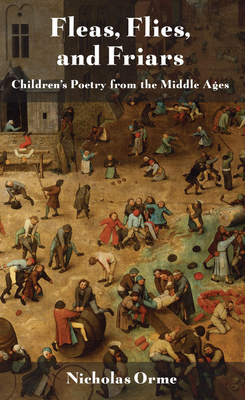 Medieval children lived in a world rich in poetry, from lullabies, nursery rhymes, and songs to riddles, tongue twisters, and nonsensical verses. They read or listened to stories in verse: ballads of Robin Hood, romances, and comic tales. Poems were composed to teach them how to behave, eat at meals, hunt game, and even learn Latin and French. In Fleas, Flies, and Friars, Nicholas Orme, an expert on childhood in the Middle Ages, has gathered a wide variety of children's verse that circulated in England beginning in the 1400s, providing a way for modern readers of all ages to experience the medieval world through the eyes of its children.

In his delightful treasury of medieval children's verse, Orme does a masterful job of recovering a lively and largely unknown tradition, preserving the playfulness of the originals while clearly explaining their meaning, significance, or context. Poems written in Latin or French have been translated into English, and Middle English has been modernized. Fleas, Flies, and Friars has five parts. The first two contain short lyrical pieces and fragments, together with excerpts from essays in verse that address childhood or were written for children. The third part presents poems for young people about behavior. The fourth contains three long stories and the fifth brings together verse relating to education and school life.

Nicholas Orme is Professor of History at the University of Exeter. He is the author of many books, including Medieval Schools and Medieval Children.