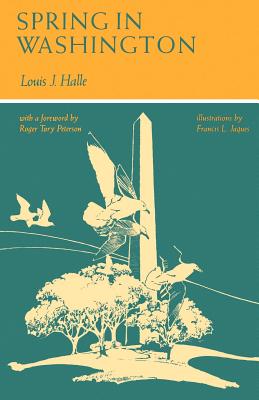 Since first published in 1947, Spring in Washington has become a beloved classic of nature writing. It is now brought back into print, complete with the original drawings by Francis L. Jaques.

As I reflect on the multitude of books published and read over the past thirty years, I can think of none to which I have returned more often and with more constant satisfaction than Louis J. Halle's Spring in Washington, a mixture of ornithology, international affairs, and reflections on the human scene, wrote John W. Nason in the American Scholar in 1961. Written by a State Department official during World War II, it is an escape to the real world of nature and man. 'To snatch the passing moment and examine it for eternity is the noblest of occupations, ' writes Halle. He does so with quiet wisdom and originality. To read him is inevitably to share his passion.

In the form of a journal, the book takes the reader along on excursions through Washington and its environs--the Tidal Basin, Rock Creek Park, and beyond--to experience the rebirth of the season. To the movement of winds and skies, the migrations of birds, the budding of plants and trees, Mr. Halle brings a quick and observant eye. But more important, he brings an imagination that can evoke in the reader a new perception of the drama in the universe around him.

Louis J. Halle, naturalist and political scientist, was borm in New York City, educated at Harvard Univeristy, and now resides in Geneva, Switzerland. His many books include Birds against Men, winner of the Johns Burroughs Medal. In 1979 he recieved the Audubon Naturalist Society's Paul Dartsch Award for outstanding contributions to the field of natural history.