How Asia Works: Success and Failure in the World's Most Dynamic Region (Paperback) 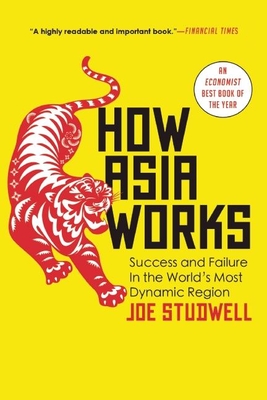 How Asia Works: Success and Failure in the World's Most Dynamic Region (Paperback)


Not On Our Shelves—Ships in 1-5 Days
Named by Bill Gates as one of his Top 5 Books of the Year
An Economist Best Book of the Year In the 1980s and 1990s many in the West came to believe in the myth of an East-Asian economic miracle, with countries seen as not just development prodigies but as a unified bloc, culturally and economically similar, and inexorably on the rise. In How Asia Works, Joe Studwell distills extensive research into the economics of nine countries--Japan, South Korea, Taiwan, Indonesia, Malaysia, Thailand, the Philippines, Vietnam, and China--into an accessible, readable narrative that debunks Western misconceptions, shows what really happened in Asia and why, and for once makes clear why some countries have boomed while others have languished. Impressive in scope, How Asia Works is essential reading for anyone interested in a region that will shape the future of the world.

Joe Studwell is the founder of the China Economic Quarterly. He has worked as a freelance journalist in Asia for nearly two decades. He is the author of The China Dream and Asian Godfathers.