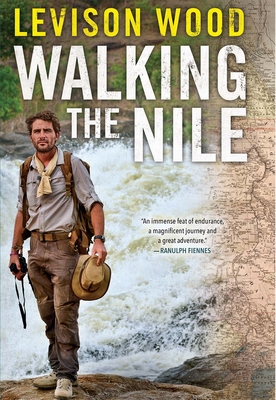 
Special Order—Subject to Availability
The Nile, one of the world's great rivers, has long been an object of fascination and obsession. From Alexander the Great and Nero, to Victorian adventurers David Livingstone, John Hanning Speke, and Henry Morton Stanley, the river has seduced men and led them into wild adventures. English writer, photographer, and explorer Levison Wood is just the latest. His Walking the Nile is a captivating account of a remarkable and unparalleled Nile journey. Starting in November 2013 in a forest in Rwanda, where a modest spring spouts a trickle of clear, cold water, Wood set forth on foot, aiming to become the first person to walk the entire length of the fabled river. He followed the Nile for nine months, over 4,000 miles, through six nations--Rwanda, Tanzania, Uganda, South Sudan, the Republic of Sudan, and Egypt--to the Mediterranean coast. Like his predecessors, Wood camped in the wild, foraged for food, and trudged through rainforest, swamp, savannah, and desert, enduring life-threatening conditions at every turn. He traversed sandstorms, flash floods, minefields, and more, becoming a local celebrity in Uganda, where a popular rap song was written about him, and a potential enemy of the state in South Sudan, where he found himself caught in a civil war and detained by the secret police. As well as recounting his triumphs, like escaping a charging hippo and staving off wild crocodiles, Wood's gripping account recalls the loss of Matthew Power, a journalist who died suddenly from heat exhaustion during their trek. As Wood walks on, often joined by local guides who help him to navigate foreign languages and customs, Walking the Nile maps out African history and contemporary life. An inimitable tale of survival, resilience, and sheer willpower, Walking the Nile is an inspiring chronicle of an epic journey down the lifeline of civilization in northern Africa.
Levison Wood is a writer, photographer, and explorer, who has travelled in over 80 countries, documenting the journeys of tribal peoples and minority groups. He served in Afghanistan as an officer in the British Army Parachute Regiment and is co-founder of Secret Compass, a Fellow of the Royal Geographical Society, and an International Fellow of the Explorers Club. His work has featured in international publications around the world including National Geographic, Discovery Channel Magazine, and on CNN, Channel 4, and the BBC. When not abroad, he lives in London.